When it comes to industrial and commercial use of electricity, safety is paramount. Electricity in HV, MV or even LV is very unforgiving.  If not properly managed, electricity can cause serious injury and death.

The ever-increasing demand for electrical energy has forced electrical systems to expand and grow rapidly. That increased pressure on systems carries increased potential danger for employees working on them as well as the potential for original equipment becoming under rated for the growing system.

According to Safe Work Australia, 142 workers died as a result of contact with electricity (an average of 11 workers each year) between 2003 and 2015. Of these deaths, 87% occurred while installing infrastructure.  Injuries from Arc Flash included burns and blast injuries from the resulting pressure waves as well as those caused by flying debris.

Any resulting short-circuit current may exceed the thermal, mechanical and interrupt capability of the system, potentially causing a catastrophic failure and Arc Flash.

What are Arc Flashes?

The Australasian Mine Safety Journal explains Arc Flashes as extreme surges of heat energy that can severely injure, or even kill, anyone within a radius of 3 metres or more. The sound waves and pressure from a flash can even throw workers across the room in certain instances. Regular risk evaluations can play a large role in prevention, as well as proper warning signage along with infrared monitoring and employee training.

An Arc Flash event happens extremely fast and in four distinct phases. The entire event culminates in between 100-300 milliseconds from the fault occurring.

Phase 1 (Compression) between 10-30 milliseconds; Ignition event with current flowing through ionised Air.  This results in a plasma effect and rapid energy release.  A significant flash or light emission is triggered, and maximum pressure created.

Phase 2 (Expansion) 30-50 milliseconds; Copper etc expands 67,000 times when vapourised.  A shock and pressure wave will be created, reaching up to 4 bars.

Phase 4 (Burn through) 100-300 milliseconds; Thousands of degrees of Arc Energy are concentrated in the fault area / compartment.  Molten metal will be sprayed outward and toxic gases Cu02 released.  Even the metals present, steel and copper etc will be burning.

In many cases, the Arc Flash will already be occurring before the circuit breakers are activated and begin to open.

When and where do electrical faults occur?

According to the Australian Energy Council’s (AEC) Electrical Arc Flash Hazard Management Guideline unintended and uncontrolled electrical arc faults can occur in a range of workplace locations and circumstances, and during a range of activities.

Any activity in the vicinity of energised conductors has the potential for Arc Flash, but Arc Flash most commonly happens when a person is working on an energised circuit or equipment.

Arc Flash impacts at a glance

Within Australia, there is very limited access to statistics around the severity of the danger, and we typically only hear of the extreme incidents. Many of the lesser injuries going unnoticed by all but those closest to the people involved.

It’s no surprise then that organisations worldwide want to do all they can to mitigate Arc Flash and protect their employees who are exposed to electricity. 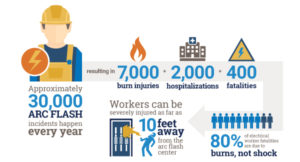 What is arc flash mitigation?

When applied to electrical workplace safety, Arc Flash mitigation involves taking steps to minimise the level of hazard and/or the risk associated with an Arc Flash event.  Most Arc Flash mitigation presently revolves around detection of a fault using cameras, sensors and associated technology.  Switchboards and other high-risk areas are being built to new standards to try and contain or channel the effects of Arc Flash events.

Some organisations have operators wearing reflective suits or even physically separate their workers from high-risk situations, such as operating large circuit breakers from a control room.

CSE Uniserve have a better way.  A solution that acts within milliseconds of detecting a fault occurring, rather than waiting on sensors to trigger circuit breakers or designing cabinets to channel or contain blasts. The product has a twenty-year life, can be permanently mounted, inside or out, is maintenance free and if an event does occur, the system can be reset within 30 minutes once the issue is resolved.

How to remove Arc Flash danger

What if one small but effective piece of technology could manage risks by minimising Arc Flash incidences?

The G&W CLiP®, distributed by CSE Uniserve, is the most versatile current limiting device available for arc flash protection. It enables protection of a system from catastrophic damage and downtime while keeping personnel safe. 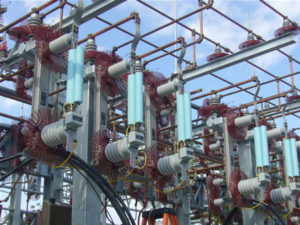 How does the CLiP work?

When a short circuit current occurs, a sensing unit actuates a linear cutting device. This opens a copper busbar and bends it upward, forming a gap.

An arc is formed at this gap and resultant arc voltage causes transfer of the short circuit current to a small, parallel commutation fuse.

The fuse melts and clears the circuit. As a result, current extinction occurs in the first half cycle or less than 10 milliseconds. Additionally, reliable interruption is assured without venting of ionised gases.

The CLiP – stopping arc flashes before they happen

Although you won’t completely prevent arc flashes from occurring, the CLiP can shut down operations before the impact is too severe. The CLiP operates extremely fast, much faster than circuit breakers or other switchgear.

A CLiP stops the issue before it becomes catastrophic, prevents injury to workers and serious damage to infrastructure.

Acting similarly but much faster than a fuse, the CLiP’s most attractive feature is the speed in which it opens the circuit – in just one hundredth of a second.

There is nothing that achieves the same result faster.

As every situation is different, the G&W CLiP is bespoke – manufactured to the client’s specific needs and can be ready to be installed on site within 12-14 weeks. It can be installed inside or outside, vertically or horizontally and requires no ongoing maintenance.

Current limiting protection devices can generally be used for different functions to not only protect underrated equipment and of course minimise damage to equipment, but ultimately to mitigate the risk and severity of an Arc Flash event.

In other words, the current limiting protection device is a critical piece of the Arc Flash mitigation puzzle, as it serves as an insurance policy for an organisation’s workforce and a vital piece of electrical equipment.

In the case of Arc Flash mitigation, current limitation is preventing catastrophic failure of the equipment and eliminates one’s exposure to the energy of an arc flash blast. During an arc fault, a current limiting device mitigates the effects of direct exposure to released energy. 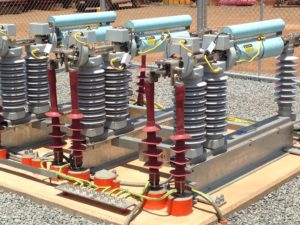 What applications can the CLiP be used for?

The energy generated by an Arc Flash can cause significant equipment damage and/or serious injury. For personnel protection, Personal Protective Equipment (PPE) is often used, but the best method is to minimise or eliminate the problem before serious injury and damage occurs.

Upgrading entire facilities is often cost prohibitive. The CLiP can be used to eliminate the need to replace underrated equipment.

The CLiP will interrupt the fault current passing through it before the first peak current is reached, significantly reducing the peak let-through current and interrupting duty to a value within the ratings of the equipment.

Even if equipment is rated properly to withstand the available fault duty, the let through energy of a fault may still result in costly damage. Traditional equipment such as relays, circuit breakers and current-limiting reactors are far less effective at preventing this from occurring. 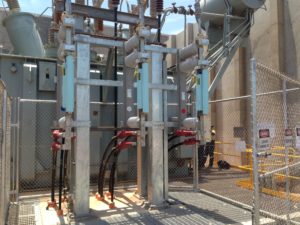 Contact CSE Uniserve to find out more and to arrange a quote on this product for your project. Call 1800 987 616.

Speak with a member of our friendly Engineering Support team today....

Have a problem you need a solution to? Not sure which product is best for your needs? Just want to reach out? Simply fill in the form below, and a member of our Engineer Support team will be in contact within 24 hours to help you find a solution.